FIND OUT THE SUPPORTED PROJECTS 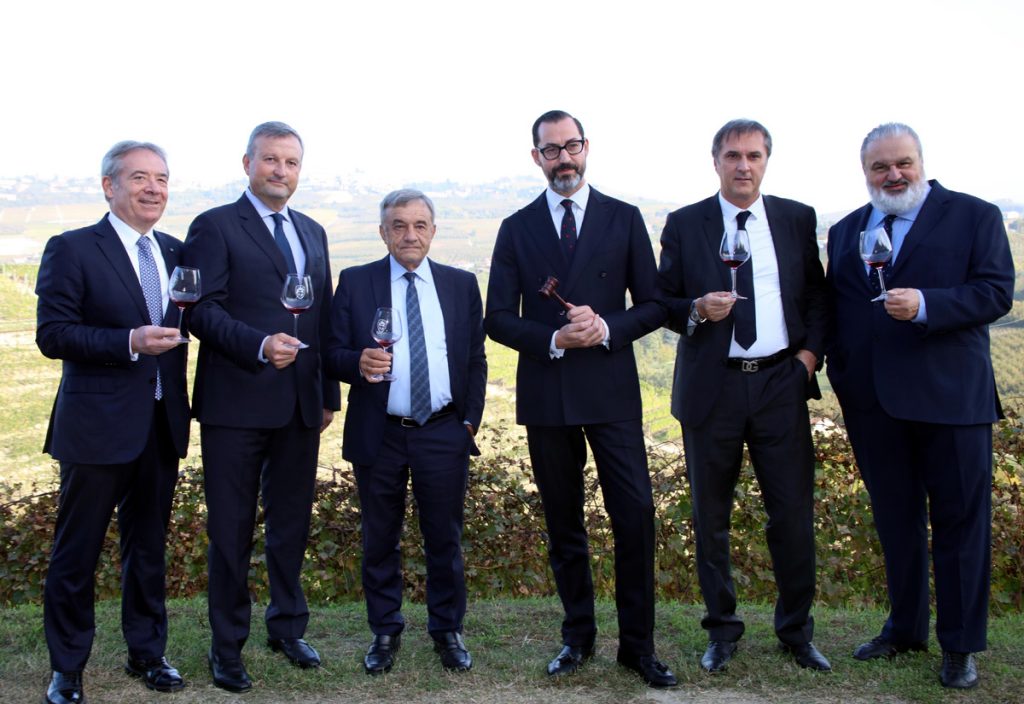 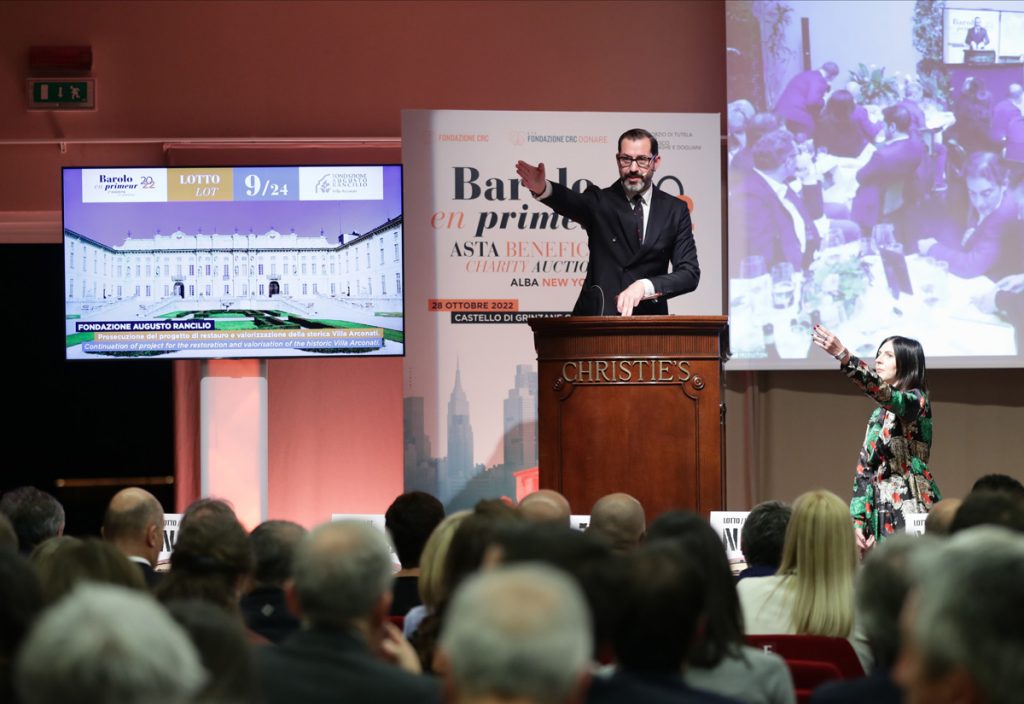 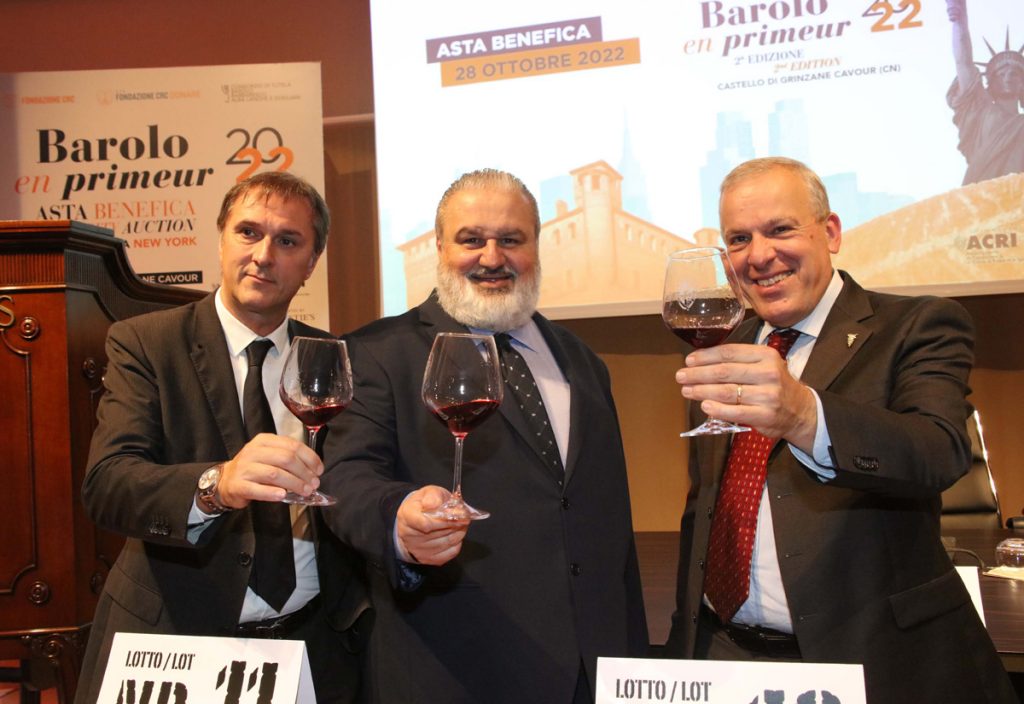 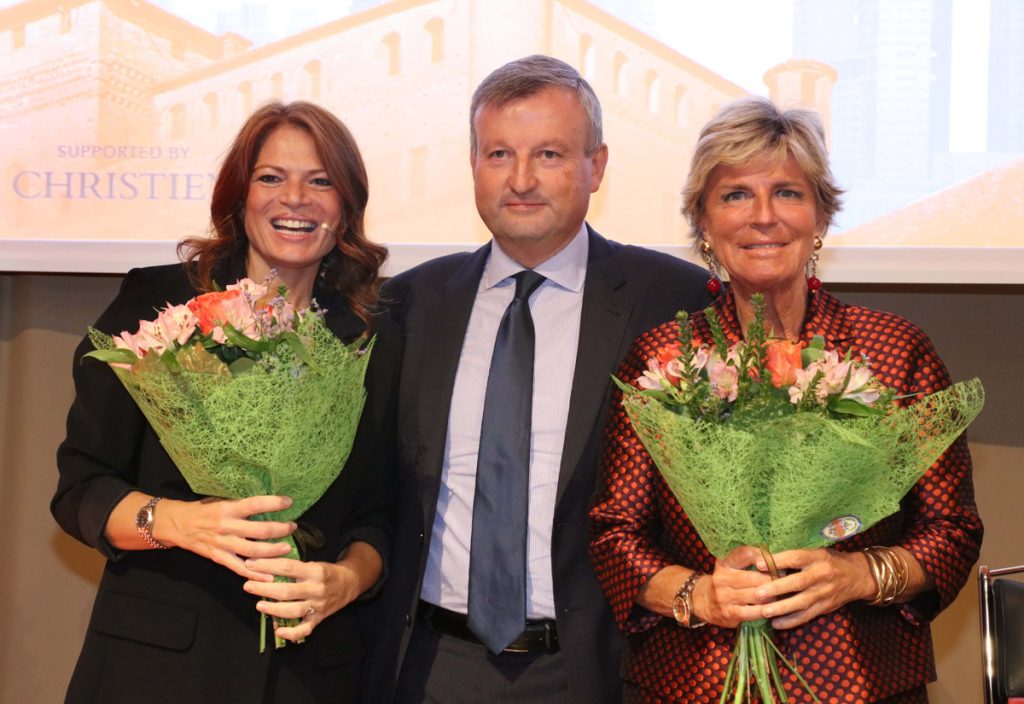 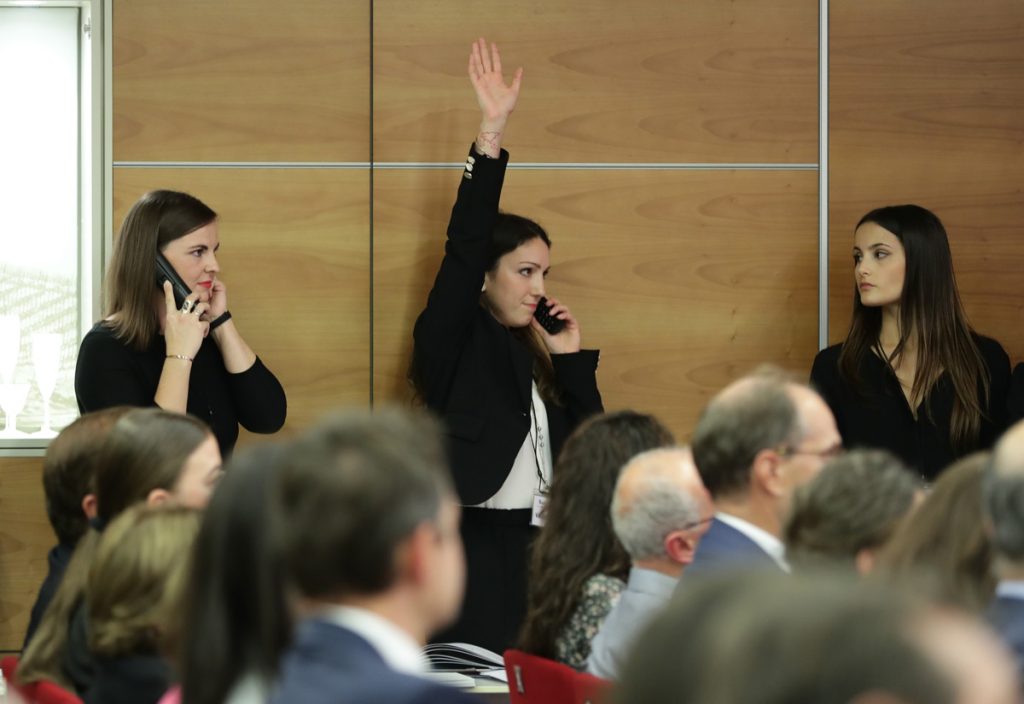 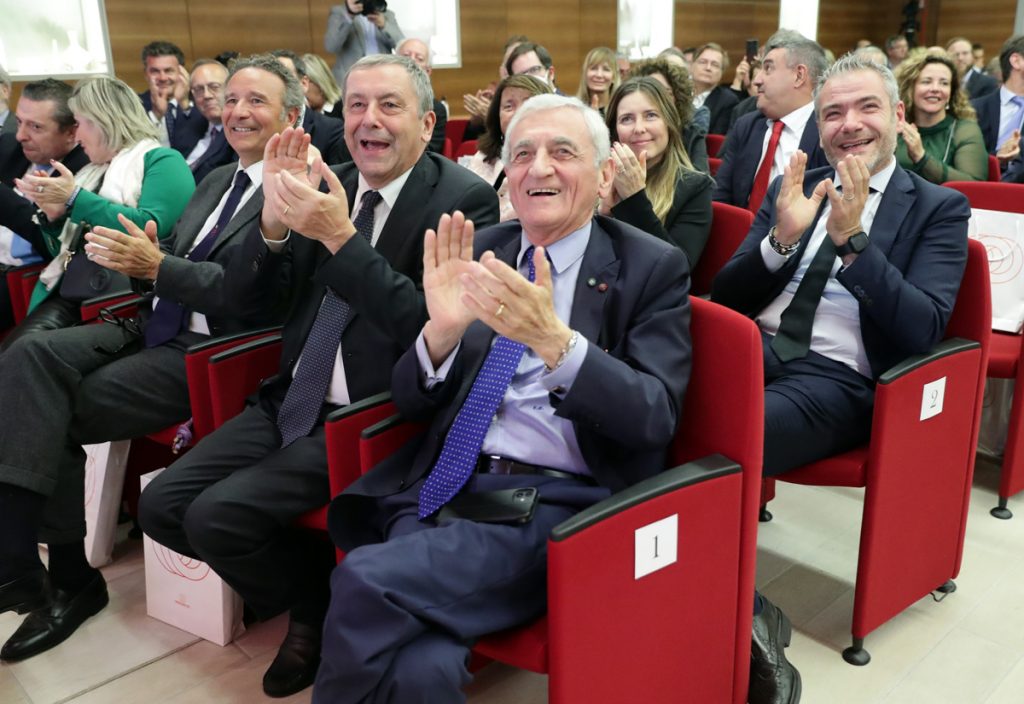 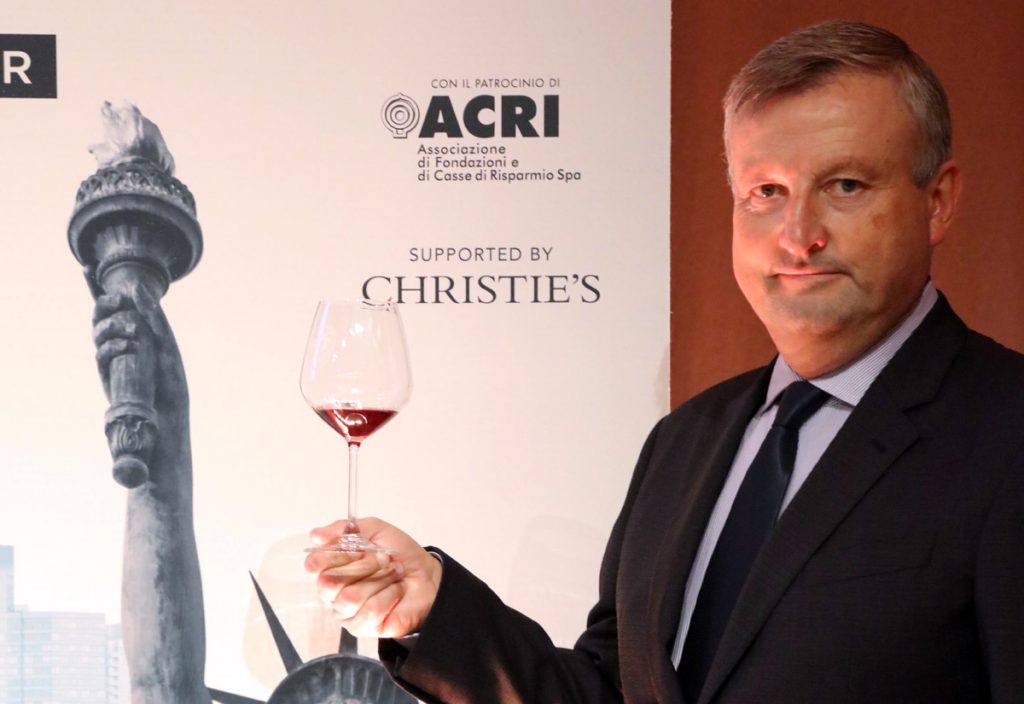 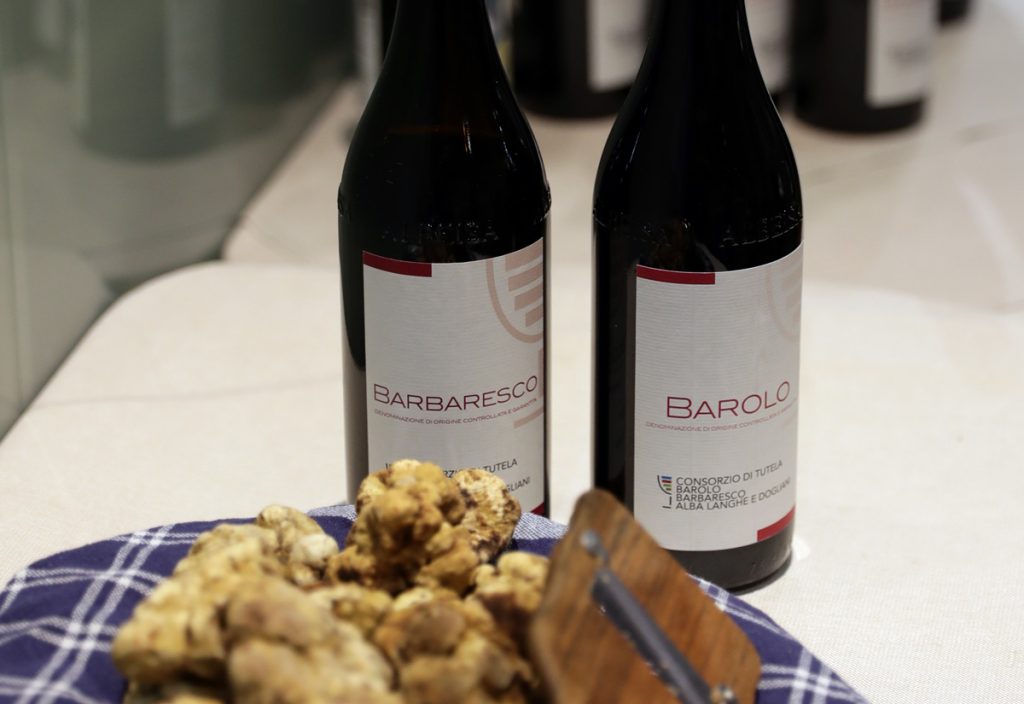 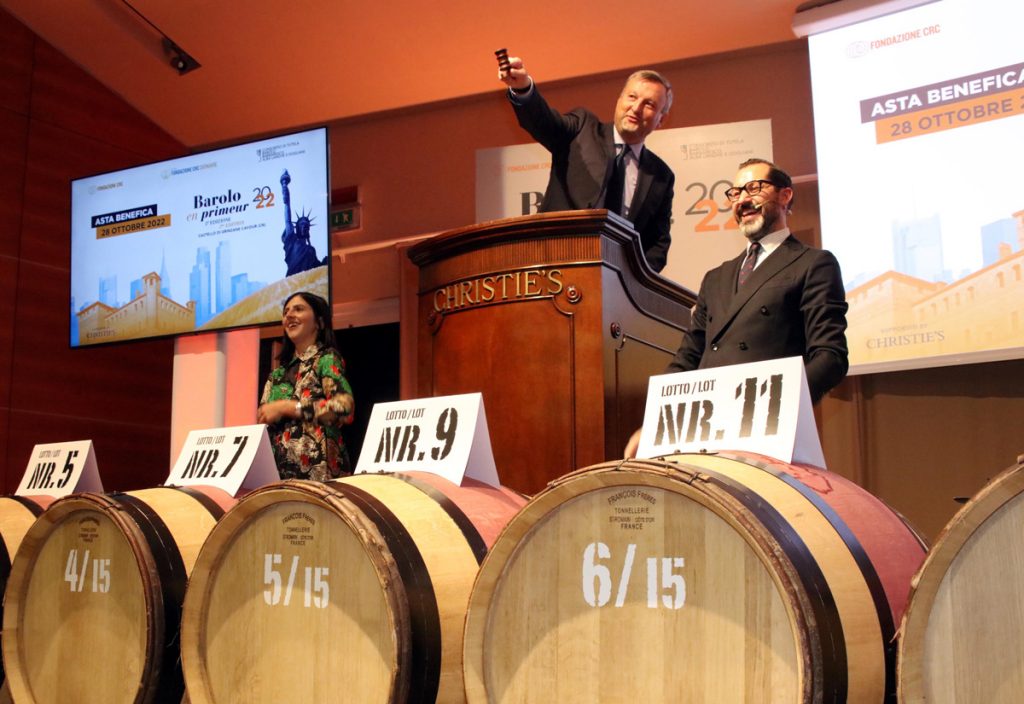 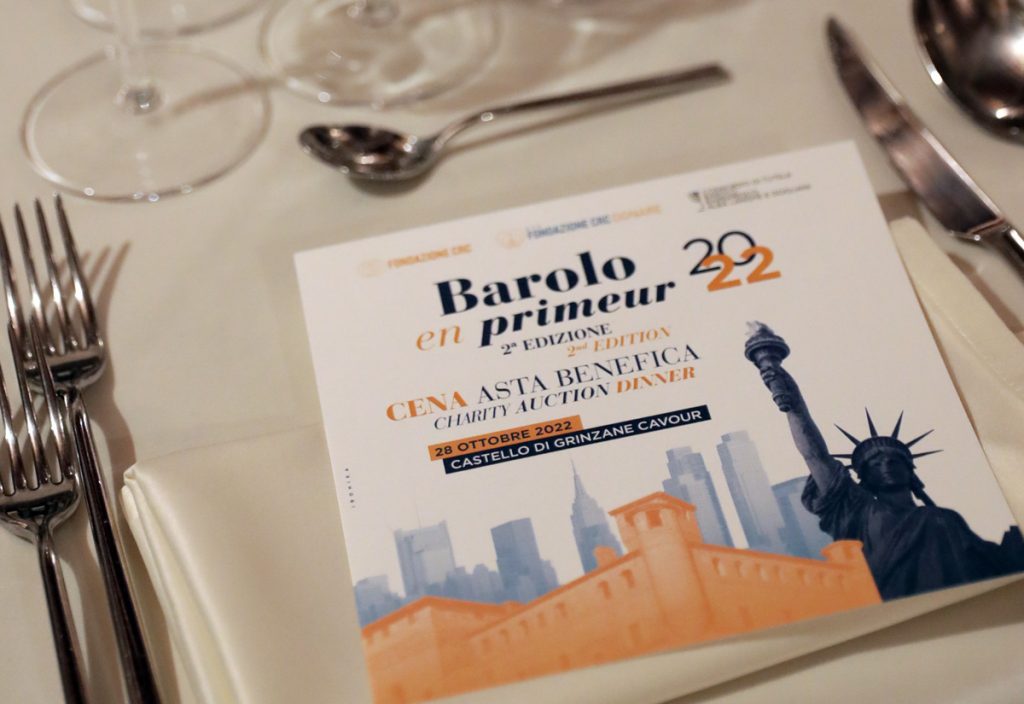 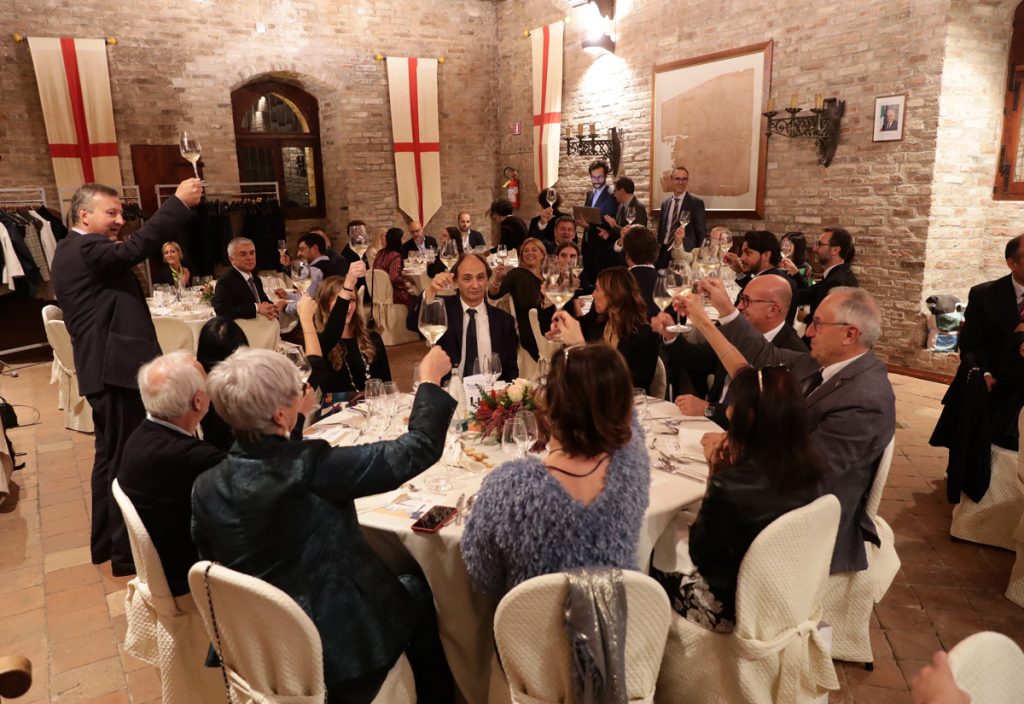 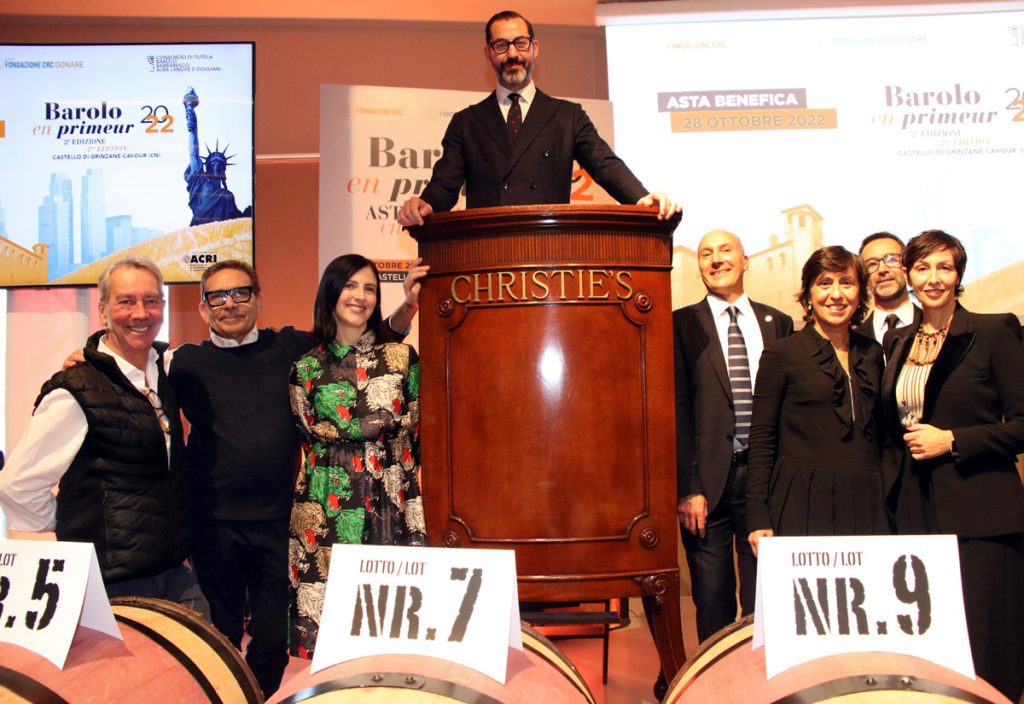 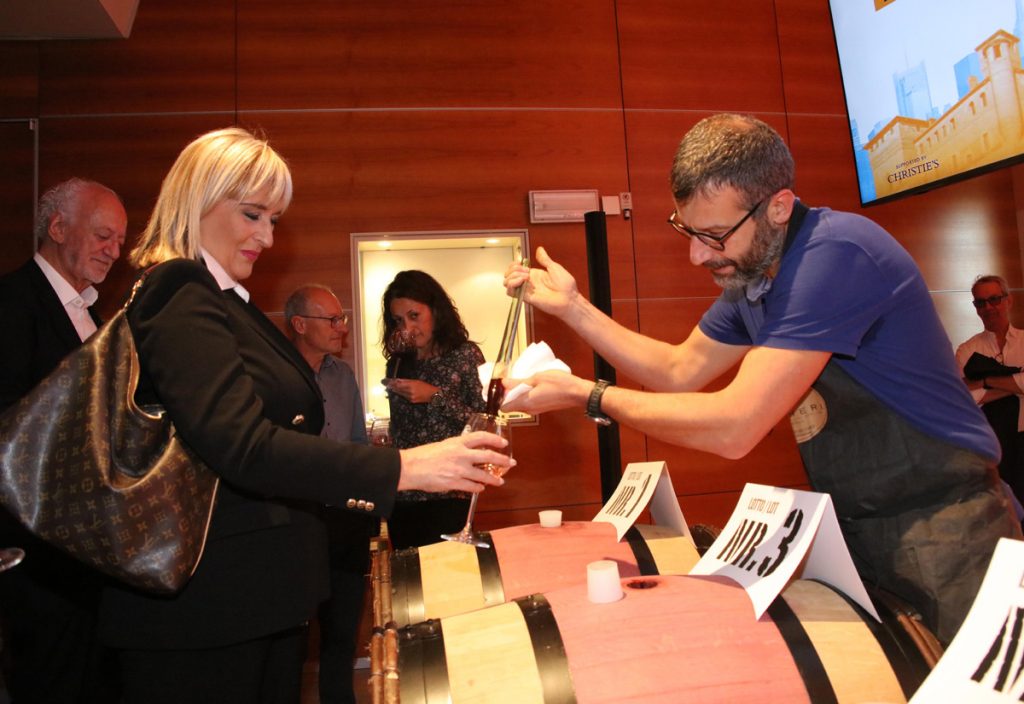 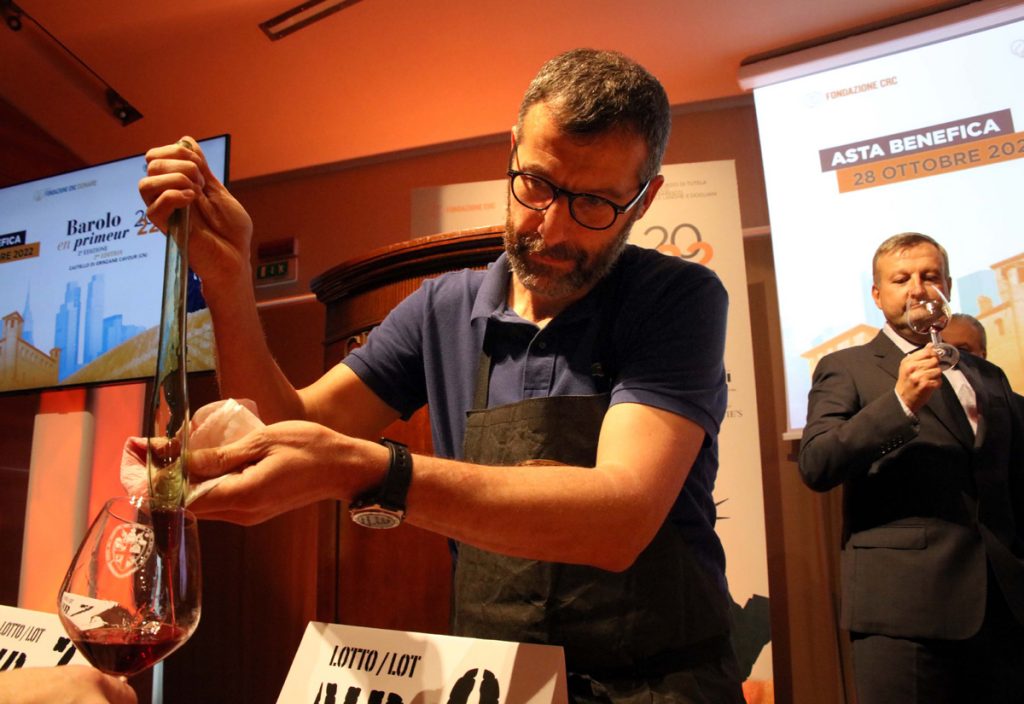 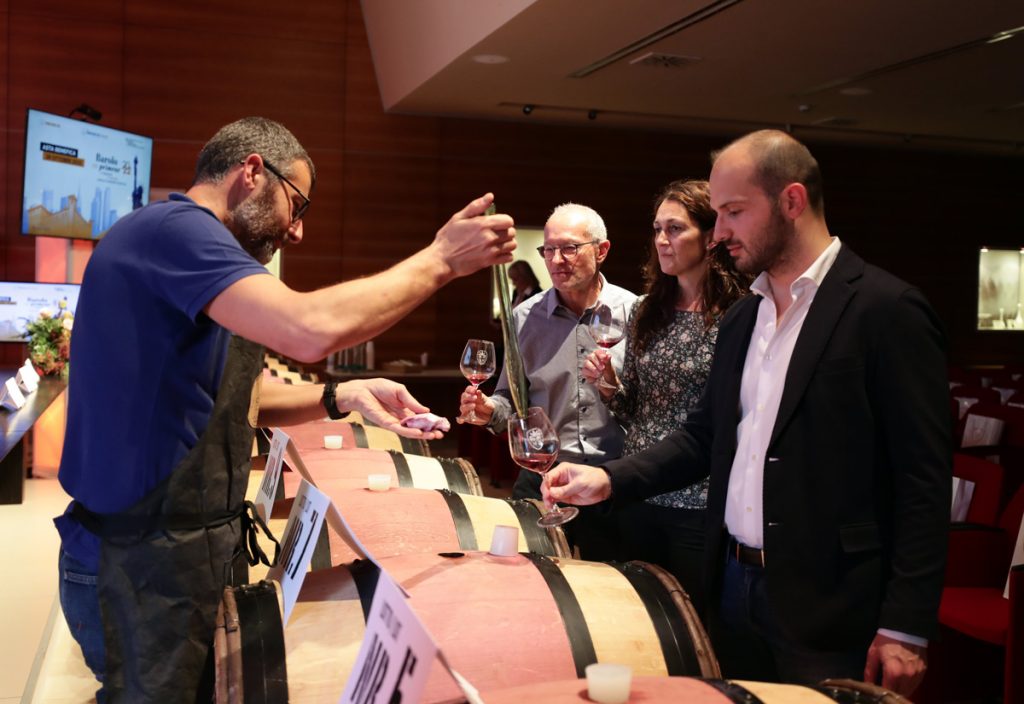 Barolo en primeur 2022 is a social responsibility project launched by the Cassa di Risparmio di Cuneo Foundation, in conjunction with the CRC Donare Foundation and the Consortium of Protection of Barolo Barbaresco Alba Langhe and Dogliani: a charity auction in aid of socially useful projects, offering 15 barriques of a prestigious wine such as Barolo still being aged in the barrel. In the spectacular setting of the Grinzane Cavour Castle, in simultaneous linkup with New York, on 28 October 2022, in the presence of Antonio Galloni, world-famous wine critic and Vinous CEO, the charity event to raise funds for non-profit organisations and projects will take place under the careful direction of Christie’s auction house.

Once again this year, the proceeds will be donated to social projects and initiatives in the fields of health, research, the arts and culture, as well as schemes promoting social inclusion and the safeguarding of the Italian cultural heritage. The projects and initiatives will be selected by CRC Foundation and CRC Donare Foundation prior to the event. The barriques contain the wine made from the grapes; harvested in 2021 in the historic Cascina Gustava Vineyard, Grinzane, produced and vinified by Donato Lanati, the internationally renowned oenologist.

When the wine has completed the ageing process, in 2025, each barrique will yield around 300 bottles, which will be numbered and marked with a label specially created by an internationally renowned artist: a unique collection that will showcase Barolo and its territory at international level, while at the same time supporting various social projects in Piedmont, Italy and the world.

News of the second edition

For the 2022 Auction Event also the prestigious wine producers of the Consortium of Protection of Barolo Barbaresco Alba Langhe and Dogliani will participate: the wineries, united under the name of the Municipality of production, shall auction the most prized bottles of Barolo and Barbaresco also from the 2021 harvest.

The Gustava Vineyard is a piece of land of almost 4 hectares extending over the slopes of the hill of Grinzane Cavour Castle, already planted with vines when the property belonged to Count Camillo Benso.
With the aim of producing top quality Barolo in this historic vineyard, the CRC Foundation – its owner – has involved Donato Lanati’s Enosis Meraviglia Laboratory. Donati has been tasked with overseeing the whole production process, from the ripening of the grapes to the vinification and subsequent ageing in the bottle.
A Steering Committee was also set up to define the guidelines for showcasing the vineyard and the grapes produced. The Committee is chaired by Matteo Ascheri, President of the Consortium of Protection Barolo Barbaresco, and comprises Vincenzo Gerbi, Professor Emeritus of the University of Turin and Vladimiro Rambaldi, Sole Director of the Agenzia di Pollenzo S.p.A. in addition, the researcher Anna Schneider (of the National Research Council – Institute for the Sustainable Protection of Plants) has collaborated on the project.
The renowned wine critic, Antonio Galloni, has been fundamental to the project. He captured the essence of each of the barriques in an innovative Non-Fungible Token (NFT).
Galloni tastes more than ten thousand wines each year and provides his insight to readers around the world in his highly influential publication, Vinous. Many of these wines are tasted while still in barrel, with Galloni using his considerable experience and expertise to extrapolate their future potential. In the context of Barolo en primeur 2021, Galloni has tasted each of the barriques and published his tasting notes in Vinous, so that bidders can read his opinion about how these rare wines capture the essence of Barolo and, in particular, of the Gustava Vineyard. Galloni’s tasting notes not only describe the wine at the specific moment it is tasted, but also anticipate its likely evolution. An image of Galloni’s description for each wine has been coined as an NFT, a unique digital resource designating the properties of a particular virtual object. As such, in addition to owning the wine itself, those who receive the barriques will own the actual image of Galloni’s tasting note describing the unique attributes of the wine.

With this operation, the only one of its kind, CRC Foundation has created a charity event at national and international level, focusing on a territory, its beauties and singularities, creating an innovative event that can generate important social benefits.

The Barolo en primeur charity event is not only of great historical and social importance, but is also highly significant for the Barolo wine sector, which is projected at an international level.

The Barolo en primeur event represents an initiative of high scientific, educational and human value, capable of combining various aspects: the promotion of the wine-growing area, of which the vineyard is the mainstay, research with in-the-field teaching and the important social aims pursued by the CRC Foundation.

The event offers collectors an unprecedented chance to participate in a major philanthropic initiative and receive the benefit of a barrel of a 2020 vintage Barolo, made from a specific plot of land within a historic vineyard. Bidders should be encouraged by the rarity of the wines, the specially commissioned artwork and the charitable causes involved. It all adds up to making this a very special occasion.

With the acquisition of the Cascina Gustava Vineyard in 2019 – the genesis of the Barolo en primeur operation – the Cassa di Risparmio di Cuneo Foundation launched an important social project which:

• integrates local development, territorial community involvement, training and economic and social values;
• promotes on-the-job training for the students of the Umberto I High School or the Alba Wine School;
• contributes to supporting socially useful projects, raising funds for “good causes” represented by non-profit organisations that share the aims of this initiative;
• showcases one of the assets of excellence of the Barolo territory, wine production, famed throughout the world, thanks also to a project that is unprecedented for Italy, that is, the auctioning of wine en primeur for solidarity purposes.

The surface of the Gustava Vineyard planted with Nebbiolo has been divided into four macro plots, according to altitude and exposure. Two different criteria were adopted for gathering the grapes during the 2020 harvest: the first was to identify the historical vines planted over 50 years ago, in order to vinify the grapes separately from the younger ones; the second criterion, on the other hand, was to harvest the remaining grapes in the vineyard by micro-zones.

This method of precision harvesting shows how the potential of a wine, in addition to exposure and climatic and seasonal trends, depends mainly on the ability of the vine roots to enter into symbiosis with the micro-organisms present in that specific portion of land, enabling the plants to absorb micro-elements and organic substances, which are different from the adjacent micro-areas, on which the organoleptic differences and, even more so, the longevity of the wine produced will depend. The wines are beginning the ageing phase in which the link between tannins and anthocyanins evolves, aimed at achieving colour stability and brightness. Although it is too early to judge the characteristics of the wine that will be obtained, important differences are already evident both between the wines obtained from the historic vines, compared to the younger ones, and, above all, between the wines obtained from the different micro-zones, highlighting the fact that the vineyard is a complex mosaic of parcels, each with its own clear and specific personality.

The Barolo icon and its territory

The Piedmontese territories of Langhe-Roero and Monferrato are a popular national and international wine tourist attraction, an extraordinary example of the perfect integration of man and the environment, recognised by UNESCO, which has decided to award these territories World Heritage status, the first acknowledgement in the world of a wine-producing area.

The territory of Barolo has become one of the most internationally appreciated wine tourist destinations, inspired by the iconic nature of the wine that bears its name and the rediscovery of the beauty of the area.

Barolo, with its extraordinary international reputation, is already the driving force behind the promotion of the area, also on account of the work of the Barolo Barbaresco Alba Langhe Dogliani Consortium, which for over seventy years – together with its producers – has been a leading player in the technical, economic and social development of the Langhe wine-growing region.

This is the context in which Barolo en primeur is set, a unique event that aims to promote the remarkable nature of this wine and its territory at an international level.

The barriques associated with the charity event Barolo en primeur 2021 are unique, in a limited number of exemplars, and contain a wine with distinctive characteristics that will not be found in any other bottle, as confirmed by the oenologist Donato Lanati and the wine critic Antonio Galloni. This is the case with the 15 barriques that take centre stage at Barolo en primeur 2021.

These are barriques with a high social value, which will be gifted in this major charity initiative, thanks to which it will be possible to support numerous initiatives and bodies operating in the non-profit field.

A wine, therefore, that is an expression of a territory and its ability to work together in support of programmes of general and social interest.

This website uses cookies to improve your experience while you navigate through the website. Out of these, the cookies that are categorized as necessary are stored on your browser as they are essential for the working of basic functionalities of the website. We also use third-party cookies that help us analyze and understand how you use this website. These cookies will be stored in your browser only with your consent. You also have the option to opt-out of these cookies. But opting out of some of these cookies may affect your browsing experience.
SAVE & ACCEPT